The Bernese Mountain Dog is a stunning canine breed. It’s not only prized for its good looks, but its intelligence and chilled-out demeanour. Though they’re large dogs, they get on well with children and make excellent family pets. However, they do require training from a young age to get their high energy levels under control.

If you’re considering a Bernes Mountain Dog as a pet, find out all you need to know about their care with our handy guide.

History of the Bernese Mountain Dog

Bernese is short for Berner, which is where the breed comes from. Bernese Mountain Dogs originate from the Swiss Alps and are one of four breeds of Sennenhund-type dogs. They were initially bred as farm dogs and were used to pull carts of milk and cheese and guard property.

In the early 1900s, some Bernese Mountain Dog owners began to exhibit them at shows in Berne. As such, a few breeders founded the first breed club in 1907 called the Schweizerische Dürrbach-Klub.

The Bernese Mountain Dog is a large, stocky breed. It has a long tri-colour coat and a white Swiss cross on its chest. In fact, it’s the only Swiss working dog to have a long, silky coat. Most of its fur is black with red or rust markings. 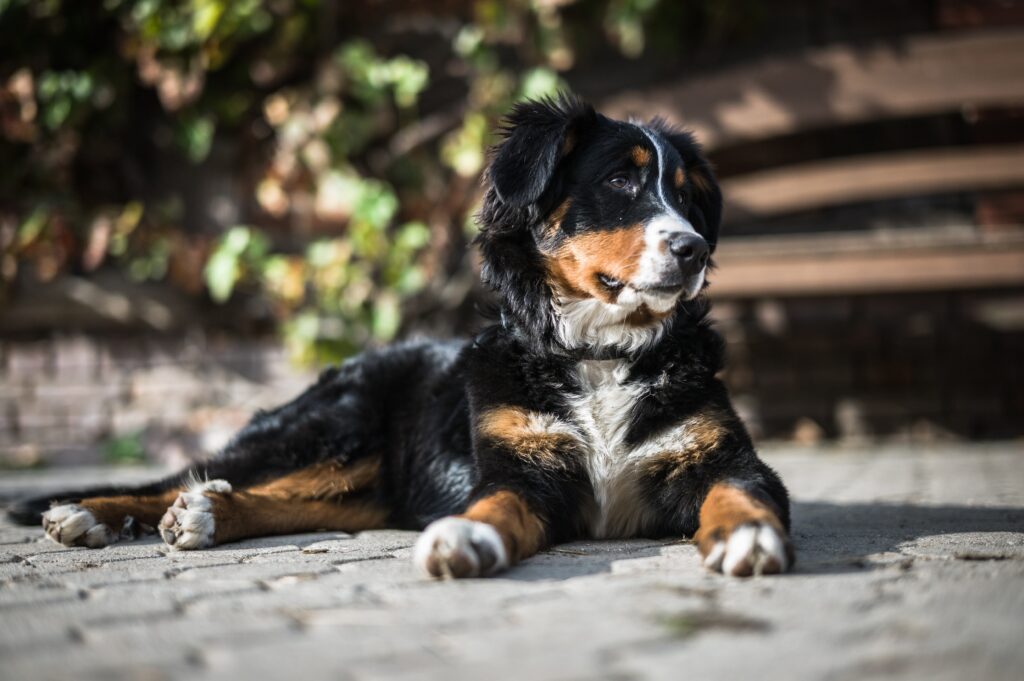 What is the average Bernese Mountain Dog lifespan?

Sadly, Bernes Mountain Dogs have an unusually short lifespan that ranges from 6 to 10 years. According to BMC Veterinary Research, the median life expectancy is 8.4 years, but females have a slightly better survival rate at 8.8 years. In comparison, a male’s is 7.7 years.

This is because they’re susceptible to a range of health conditions. They’re also more at risk of cancer than other dog breeds.

When measured at the shoulder blades, male Bernese Mountain Dogs are 25 to 27.5 inches while females are 23 to 26 inches. They’re longer in the body than they are tall.

Males typically weigh between 80 to 120 lbs, where females are slightly lighter at 75 to 100 lbs.

Because Bernese Mountain Dogs are susceptible to a range of health conditions, their diet must be balanced and healthy. Their food should focus on:

Some Bernese Mountain Dogs prefer eating fresh wet food rather than dry kibble, but either is fine. Some owners feed a raw diet, which they believe fulfils their dogs’ nutritional needs more effectively.

The breed needs a relatively low protein level of around 18-26% and a moderate fat content of 16%. High-protein, high-fat foods aren’t the healthiest choice because they can cause the dog to put on too much weight, applying excess pressure on the joints.

Similarly, too much protein has been thought to contribute to hotspot outbreaks, which are spots on the body that Bernese Mountain Dogs can’t stop scratching.

How much and often to feed?

Healthy Bernese pups between 2-6 months should eat three meals a day consisting of 3/4 to 1 ½ cups per meal, depending on the dog’s size and activity levels.

After six months, the dog can move to two meals a day. When it comes to commercial wet food, Bernese Mountain Dogs can have up to 1500g a day. Alternatively, 400g of dry food each day is enough.

If you opt for a meat-based diet, the average adult Bernese needs 750g of meat a day alongside 200g of vegetables or grains. You can either cook the meat or feed it raw, but consult your vet to make sure your chosen diet’s the best one for your dog. 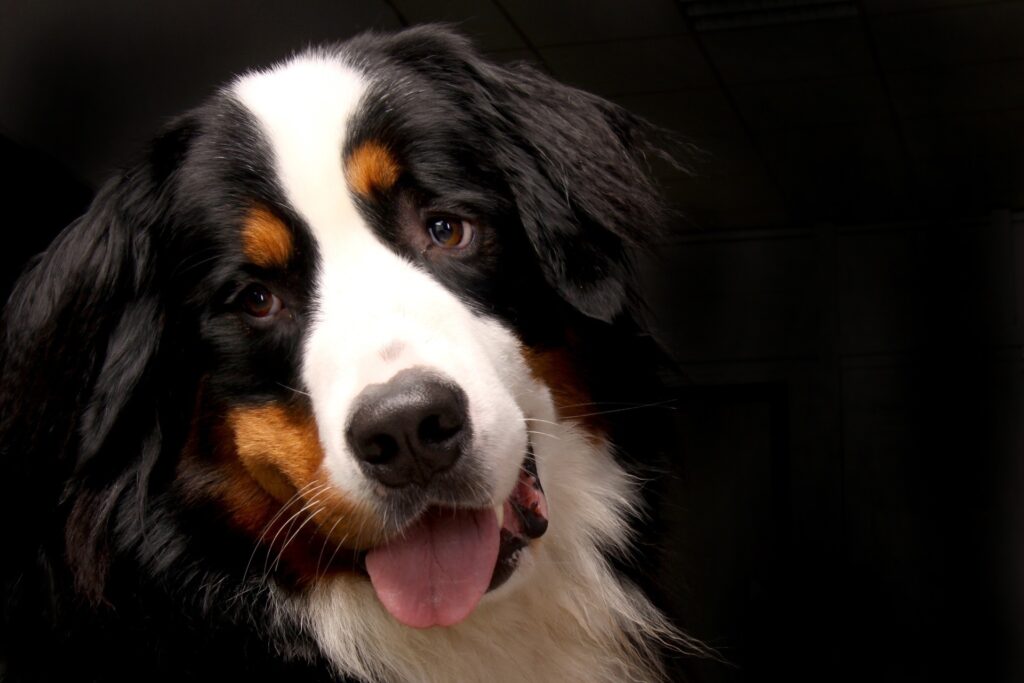 Bernese Mountain Dogs are confident, alert and good-natured. They’re rarely shy, but they sometimes appear aloof to strangers. The breed’s known and loved for being loyal, affectionate dogs, which is why some owners overlook their short lifespan.

They’re highly trainable, but if owners don’t take the time and effort to socialise their dogs when they’re pups, they can become unruly and hard to control. They also tend to bark loudly.

Because of their high energy levels, they’re not suited to small apartments or flats and need a garden that they can run around in a few times a day. They also need at least 30 minutes of vigorous exercise every day.

Bernese Mountain Dogs have a thick, wavy coat that keeps them warm in the Swiss Alps. This means their coats need a bit of TLC to remain healthy.

To do this, give your dog a regular brush a couple of times a week. You might need to increase the frequency during the shedding season. Use a pin brush for the top coat to remove the loose hairs and a slicker brush for the downy undercoat.

Don’t bathe your dog too frequently, as doing so causes dry skin. A bath once a month or less is sufficient. Trim your dog’s nails often, being careful not to cut the quick.

Because Bernese Mountain Dogs have long ears, you’ll need to regularly clean them to prevent infections or excessive wax build-up. A couple of drops of ear cleaner massaged into the ear should loosen wax and dirt, allowing your dog to shake its head to dislodge the gunk. However, be sure not to get too close to the ear canal, as you might make it sore.

What health problems do Bernese Mountain Dogs have?

Is a Bernese Mountain Dog a good family dog?

As long as they have plenty of space to move about and burn their energy, Bernese Mountain Dogs make great family pets, even though they’re massive. They have an even temperament and calm disposition, and they’re very patient. They also love to please their owners, so they’ll be happy to play with your children for hours and hours.

As with all dogs, you must teach your children to respect their dog and to treat it kindly at all times.

Because they have a double coat, Bernese Mountain Dogs do shed quite a lot. Shedding season occurs twice a year, so you’ll notice more shedding during this time. Brushing your dog’s coat once or twice a week will help remove loose hairs and keep it healthy. 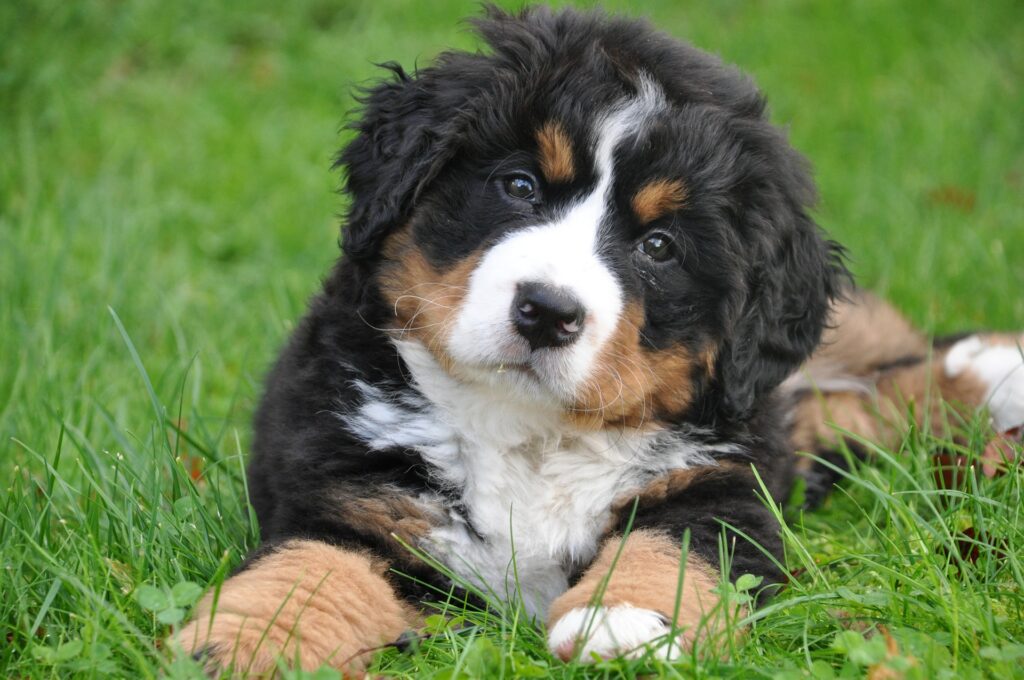 Compared to other dogs, Bernese Mountain Dogs are easy to look after. As long as you exercise them every day and keep on top of their grooming, they’re loving, friendly companions. They’re also very easy to train, but you must do so at an early age. They also like lots of attention, so be prepared to shower your dog with cuddles and kisses frequently