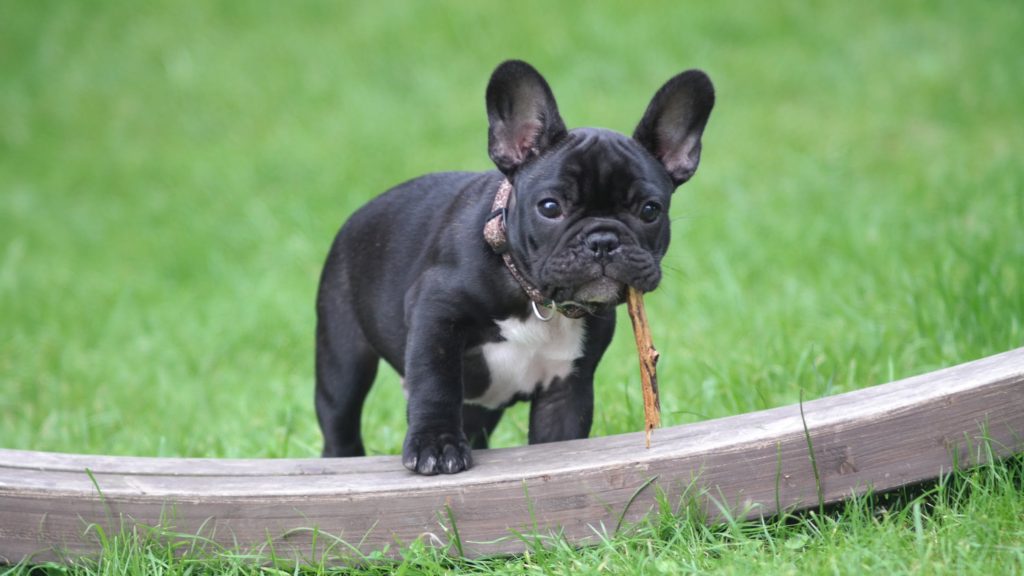 These dogs may be small but they are very defined, strong, and muscular, again just like the Pug, French bulldogs are known for their appearance, with their large square heads, flat face, slightly rounded skull, large set apart wide eyes and wrinkles these dogs have something different but something appealing about them.

French bulldogs are part of the brachycephalic family meaning flat face, these breeds muzzle is very broad and almost looks as if their smiling all the time, their nose is actually quite large compared to the size of their head but should be short and black, also due to their flat faces they tend to have undershots.

French bulldogs are known for their ears as they are referred to as having ‘bat ears’ this is because they are long and rounded at the top and very broad at the bottom of the ear, and sit at the top of the dogs head just how a bats would.

The french bulldog has an overall look of being stocky and compact, and are very well proportioned all over, they have broad shoulder and a thick neck which gives them their appearance of being strong but also looking proud.

Their tail is either straight or screwed but should never be curly, they come in a variety of colours but the main colours registers by kennel club are:

French Bulldogs are quirky playful little dogs, they are known for getting on with other pets and families with or without children, they were originally bred to be companion dogs and this is exactly what these dogs enjoy doing. these dogs are more suited to someone who is going to be home a lot as they are very much people-pleasers, when left on their own for long periods of time these dogs can develop severe separation anxiety as they do not like being left alone.

French bulldogs are very easy going and are known for being loving, loyal and friendly, when people are around they like to be centre of attention and always acting goofy and being comical to get the attention they require. when being around a Frenchie there no doubt they put a smile on your face.

This breed is very adaptive to their living surroundings whether they are living in the country or in the city centre in an apartment they adapt to life very easy. this is why they are good dogs for people living in the city and buying their first dog. Frenchies need regular exercise but due to their flat faces shouldn’t be walked far, it’s better to take them on two, but short walks daily. they are known for overheating quickly which can cause them to have a heatstroke. 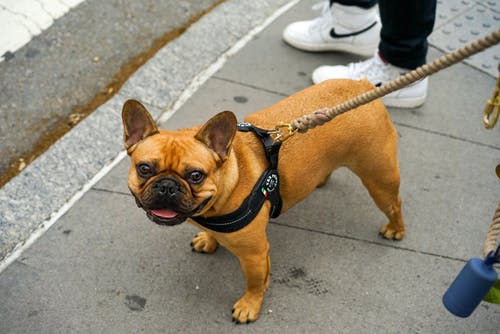 French bulldogs are not known for being aggressive, however, like all dogs, they can be put in certain situations where they feel threatened which can make them act aggressively. With most small dogs they also tend to suffer from big dog attitude which can lead them to get into trouble with other dogs.

Frenchies are known for getting very attached to their owner, which can sometimes make them a little possessive, but apart from this they are known for being very sweet, friendly characters that are loyal and only want to please their owner.

French Bulldogs are notoriously known for their love of food, they will eat anything they can get their paws on! Most Frenchies will only respond or do anything when food involved (very food driven) so it is very important to watch your Frenchies weight, do not to overfeed them and exercise on a regular basis, they are known for going through bins so make sure all food waste and where food is stored is always secure.

French bulldogs diets depend on their health and age, feed them a complete dog food to keep them slim and healthy. Thre are four main types of dog food available;

The type you choose will depend on your lifestyle, how much time you have to prepare their food, plus your dog’s preference. It doesn’t hurt to try out a few different types first to see how they respond to each one and to discover what they do and don’t like,

If you are not sure which is the best food for you Frenchie then it is advised to discuss it with your veterinarian, they will be able to give you the best advice on what is suitable for your Frenchie and also suggest how much you should be feeding them too, it’s also recommended that you split their daily allowance meal into two meals a day for them – remember to leave a gap of at least 30 minutes before exercising, giving time for the food to digest. Dogs love routine so try and feed them at the same time every day.

French bulldogs are known for being fairly quiet dogs that rarely bark, however, they can unleash the talkative sound to them if not trained properly as a puppy, it is important that your puppy is trained from an early age and socialised properly.

Frenchies can have a stubborn streak in them and if not properly trained can lead them to believe they are boss.

Frenchies are very sensitive dogs because they rely on their owner so much and want to please them they can get very upset when they do something wrong or are shouted at.

Someone who owns a Frenchie needs to be able to give this dog a lot of time especially when it comes to training as they are not the most intelligent of dogs, it can take a bit longer than normal, the same when it comes to house training this breed, again this can take a bit longer than expected (up to a year) so you must be prepared for some hard work.

The French Bulldog is a soft, playful yet comical dog, as we know this breed is a people-pleaser they are always trying to make you laugh with their goofy behavior, they love being the center of attention and love to show off, they are friendly, loyal and easy-going.

Frenchies need mental stimulation so learning new tricks is a perfect way of stimulation and spending quality time with their owner, which they love nothing more. 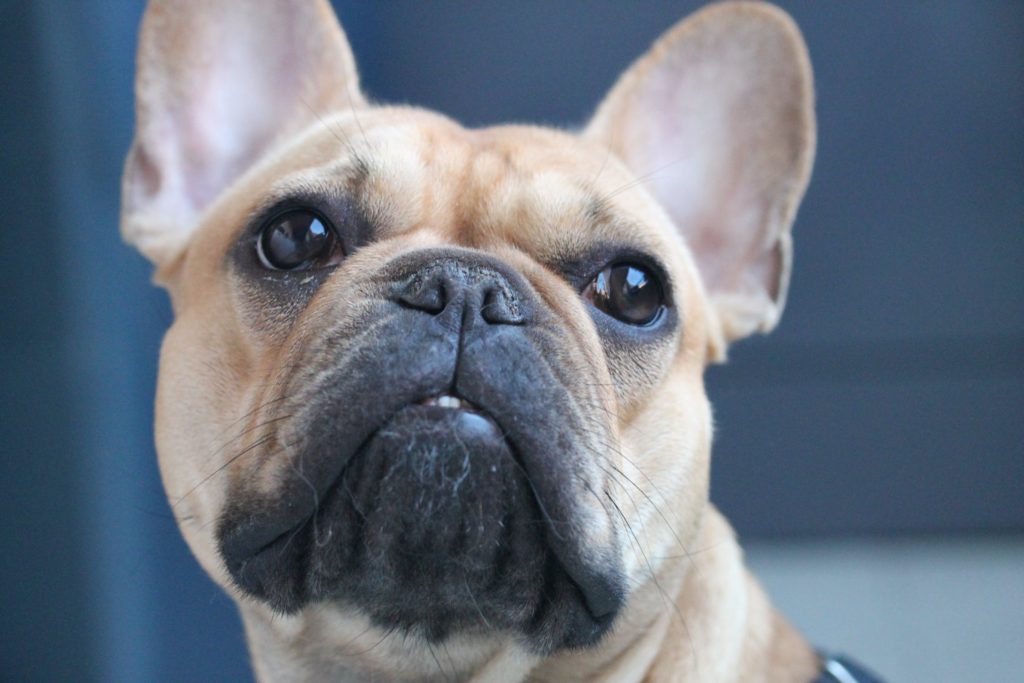 Frenchies are pretty low maintenance when it comes to the grooming side, regular brushing is required to keep their coat healthy, and also minimise shedding, french bulldogs don’t malt like other breeds but they still shed a fair amount during the seasons.

They should only be bathed occasionally and when shampooing makes sure their exposed eyes are protected.

French bulldogs wrinkles and skin folds need to be checked and cleaned on a regular basis, this is to stop a build-up of dirt and bacteria leading to infections, this breed is also prone to skin allergies.

Obesity is common in french bulldogs so it is important not to overfeed them and give them regular exercise, ensure you don’t take them on long walks as they are brachycephalic breeds, and can NOT walk for long periods of time, due to their flat faces. These breeds of dogs are known for overheating in hot weather so make sure you keep them cool and ensure there is plenty of fresh water for them.

Do French Bulldogs have health problems?

As with any purebred dog, they are always going to have some health issues, With brachycephalic breeds, there does tend to be more health problems they suffer from hee is a list of the most common problems French Bulldogs suffer from:

Let’s face it: this dog is a bundle of joy!

Although they were bred to hunt small game, this breed is just as happy lounging on the couch or getting belly rubs! French Bulldogs do well with other dogs and pets, as long as they are introduced to them when they are young.

This breed is a brachycephalic dog because it has a short muzzle. Because of their short snout, French Bulldogs cannot handle strenuous exercise in hot weather. French Bulldogs have a difficult time breathing in hot, humid weather and can quickly overheat if they are not cared for properly.

In addition to owning this breed, you have to have a bag of patience at hand! It is important that your Frenchie eats slowly and calmly, which can be a challenging feat. French Bulldogs also drool heavily and need regular bathing to prevent skin irritation.

These little dogs are known for their large, round eyes and bat ears that stand straight up. They have a sturdy build and a relatively flat face with wrinkles that form an adorable expression.

French Bulldogs may also drool, snore and snort while they sleep!

These dogs like to be with their families and make excellent lapdogs.

While they were not bred to be friendly, this breed does tend to get along well with other pets and can live in most places. French Bulldogs make wonderful family companions and love nothing more than cuddling on the couch!

When it comes down to it, French Bulldogs are wonderful dogs who are great companions. While they have some snorting, snoring, and drooling tendencies, these dogs do well in most places with proper care!

Is it cruel to buy a french bulldog?

Before you buy anything, make sure you can provide for the dog by having plenty of space to accommodate your Frenchie’s needs.

Why are French Bulldogs so expensive?

French Bulldogs have increased in popularity recently, which has led to a drastic increase in their value. The demand for Frenchies far outweighs the supply of them in North America, causing prices to rise dramatically.

French Bulldogs are a low maintenance breed that doesn’t need much exercise. However, they do require grooming every few weeks to keep them looking their best!

What is the temperament of a french bulldog?

How long do French Bulldogs live?

The average lifespan for a French Bulldog is between 10 and 12 years of age, although some have lived up to 15 years!

How big do French Bulldogs grow?

French Bulldogs range in size from 22 lbs to 45 lbs. They are between 8 and 12 inches tall at the shoulder.

Thank you for reading this post on french bulldogs! I hope it has helped

Now that we have covered as much general information and advice on French bulldogs we hope this helps you effectively care for your new puppy but help you learn more about this breed before buying one.

The Frenchie makes a wonderful companion and guaranteed to make you smile. By following the right steps, you and your pooch can lead a long, happy life together.