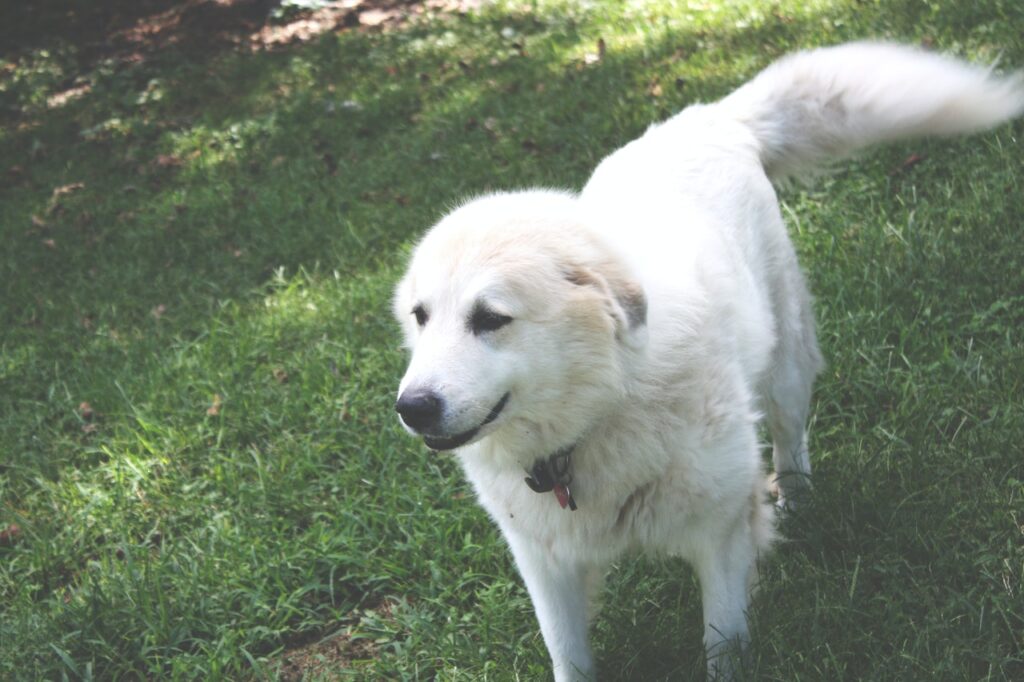 The Great Pyrenees is one of the lesser-known dogs breeds. But what it lacks in popularity, it makes up for in size – this is one large dog. It’s predominantly used as a livestock guardian dog to protect sheep from predators, such as wolves, on the snowy mountaintops they reside. But despite their power, they’re mellow companions and make wonderful guard dogs.

If you’re considering getting a Great Pyrenees or want to find out more first, we’ve got everything you need to know in this handy owner’s guide.

History of the Great Pyrenees

The Great Pyrenees’ history goes back centuries, when they were first bred to work alongside shepherds in the Pyrenees. In fact, the breed’s remains have been found in fossil deposits from the Bronze Age (1800-1000 BC).

Initially, the breed watched over livestock flocks to deter wolves, bears, and people looking to steal cattle. As a result, they have oodles of patience, having spent most of their days watching over the flock without a single sideways glance.

The breed was adopted in the 17th century by King Louis XIV as France’s official Royal Dog. This prompted French royalty to use them to guard their vast estates.

In 1933, the Great Pyrenees was recognised by the American Kennel Club, making it the organisation’s 91st breed.

Today, you’re most likely to see them used as therapy or rescue dogs. They also make kind and loving pets for the right family.

We’ve already mentioned the Great Pyrenees large size. They’re also muscular and strong, with a wide, deep chest. They have double coats, with the outer being long and course, and the undercoat is soft, fine and thick. It can become wavy around the neck and tail.

Their coat colours can be:

They also have dark brown eyes and a black nose. Though the Great Pyrenees is noticeably large, it’s surprisingly elegant and perfectly in proportion.

As we’ve already mentioned, the Great Pyrenees is a large dog. Males measure between 27 to 32 inches, while females are slightly smaller between 25 to 29 inches. Males weigh between 100 to 160 pounds, while females range from 85 to 115. Despite their size, they’re surprisingly agile and can spring into action whenever danger’s near.

The average Great Pyrenees lifespan ranges from 10 to 12 years, as long as they’re provided with proper care and training from an early age.

A Great Pyrenees diet isn’t as complex as you might think. Specially formulated dog food is best, but you should choose the best quality food you can afford.

Great Pyrenees take longer to mature than other dogs, so give them puppy food for the first two years of their life. The MSD Veterinary Manual recommends that puppies be given food with a minimum protein content of 22%. Similarly, the minimum fat content should be 8%. Chicken and salmon oils can help boost your dog’s healthy fat levels.

For adult Great Pyrenees, a dry kibble containing at least 23% protein is best. Look for healthy ingredients such as:

These things will keep your dog’s joints strong and supple while nourishing its thick coat.

How much and often to feed?

For their size, Great Pyrenees don’t eat as much as you might expect. They’re also known for piling on the pounds, so it’s a good idea to measure how much you give your dog accurately.

You should aim to feed your Great Pyrenees 4-6 cups of high-quality, low-protein dog food each day, divided up into two meals. But how much your dog actually eats depends on its size, activity levels, age, build and metabolism.

The Great Pyrenees is loved for its kind personality and docile demeanour. Though they’re gentle, they can be serious dogs. This comes from their important working past. But with training and plenty of socialisation from a young age, they grow up to be loving and well-mannered.

Another important thing to know about these dogs is that they’re highly intelligent. They have a mind of their own, which can become out of control if they’re not trained. They’re also stubborn, so you must hold your ground and stand firm while they’re small and light enough for you to control. As they get bigger, they can be difficult to say no to.

However, treat your Great Pyrenees right, and you’ll get to experience the true definition of ‘man’s best friend.’

With the right training, they make wonderful family dogs because of their calm, affectionate nature. They don’t like goofing around but are instead protectors of their family. They also have bundles of patience and are happy to be around young children. Just be sure to teach your children that they must respect their dog and be kind and gentle to it at all times.

Despite having thick, double-coated fur, it’s not too difficult to maintain. A 30-minute inspection and brush should be enough each week to keep your Great Pyrenees coat in check. Your dog will shed, but whether this is once a year or much more often depends on the dog. When this happens, it’s helpful to bathe it, as warm water helps lift the dead fur out more quickly.

What health problems do Great Pyrenees have?

As long as you feed your Great Pyrenees a healthy, balanced diet and provide it with the care it needs, it should live a long, happy life. However, they are prone to certain health conditions, such as skin problems and cataracts. They’re also susceptible to the following:

Great Pyrenees are prone to these conditions because of their large, heavy size, so always keep an eye on symptoms of joint and bone pain, such as limping, lameness, difficulty moving and excessive vocalisations.

Can Great Pyrenees be inside dogs?

Great Pyrenees are ideal indoor dogs, but they need plenty of exercise. As long as they get the chance to stretch their legs for 30 minutes to an hour every day, they’re happy to curl up and go to sleep. They sometimes bark at unfamiliar sights and sounds, but this is normal and can be improved with training.

Do Great Pyrenees Shed a lot?

Great Pyrenees are average to heavy shedders, depending on their coat’s thickness and the climate they’re in. The only way to reduce the amount your dog sheds is with regular brushing. Otherwise, expect to see white fur all over your clothes and furniture!

Like all dogs, Great Pyrenees can be aggressive if they’re not adequately trained from a young age. Because of their guarding instincts, they’re likely to defend their home from strangers. While this is a positive thing, you must train your dog to defend it properly. They can sometimes become aggressive towards people and animals they don’t know, so socialise them as much as possible while they’re pups